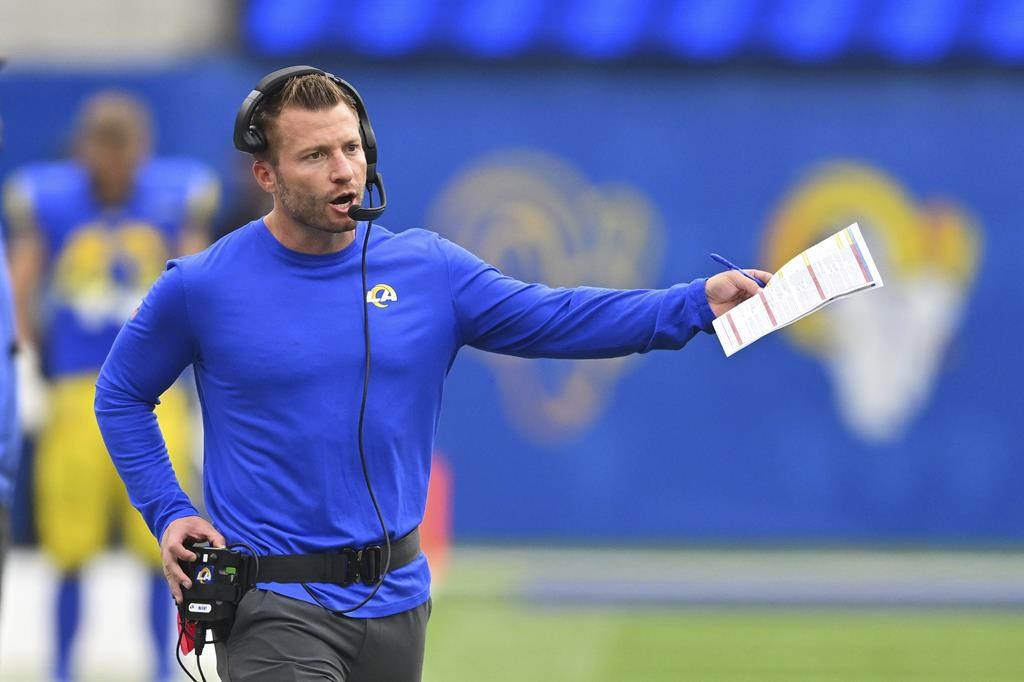 THOUSAND OAKS, Calif. (AP) — Amid Sean McVay’s countless messages of condolences from friends, co-workers and family after the death of his grandfather, the Los Angeles Rams coach said one text from a friend crystallized the way he intends to remember John McVay.

“Be the things that you loved about the people that are gone,” Sean McVay said Wednesday while fighting back tears. “And man, did he do so many things that were in alignment with what you want to be. You talk about living a full life where you truly leave a legacy, and not because of the (NFL) success that he had … but the way that he treated people. The integrity. The relationships he built, the character he had.

John McVay’s death at 91 was announced Tuesday by the San Francisco 49ers. He helped launch that franchise’s run to five Super Bowl championships in the 1980s during 22 seasons in the 49ers’ front office, most notably as their general manager. He also coached the New York Giants earlier in his NFL career.

Sean McVay won the family’s sixth Super Bowl title last February, but the Rams’ wildly successful young coach knows he got to that pinnacle on the shoulders of colleagues and mentors — and nobody gave him a bigger boost than John McVay.

“I’m just grateful for everything he’s done for me,” Sean McVay said. “It’s almost embarrassing, the opportunities that I’ve gotten as a result of the things that he’s done. When I finished up playing in college, to get right into the NFL (on Jon Gruden’s staff in Tampa Bay), nobody does that. But because of John McVay, I got a chance to do that.”

After parlaying that precocious start in Tampa Bay into bigger roles in Washington and in Los Angeles, the 36-year-old McVay has been the youngest head coach in the NFL throughout his six seasons with the Rams. McVay is a stellar 58-30 with five winning seasons, four playoff berths, three NFC West titles, two Super Bowl berths and one championship.

“You want to continue to honor the legacy he left, work as hard as you possibly can, treat people the right way, lead in the tough moments and stay humble in the good moments, just like he did always,” McVay added. “It’s an easy thing to think about, ‘How would Grandpa handle this?’ to kind of keep me in line and be really grateful.”

McVay said he’s finding time to reflect and mourn amid the day-to-day pressure of running the Rams, who are off to their worst start of his tenure at 3-4. Los Angeles visits Tampa Bay on Sunday in a rematch of last year’s divisional round playoff game.

The Rams didn’t make a splash at the trade deadline after years of aggressive player acquisition, which means McVay must solve his team’s problems largely with the players already on a top-heavy roster lacking depth at several offensive positions.

Only four teams are scoring fewer than the 16.9 points per game by the Rams, who have been soundly beaten in all four of their losses this season.

It’s still unclear whether that depth will include Cam Akers, who left the Rams three weeks ago amid an unspecified dispute with the coaching staff. Los Angeles tried and failed to trade Akers at the deadline, deciding the team couldn’t get proper value for GM Les Snead’s highest draft pick in the past five years.

Akers came to the Rams’ training complex Wednesday morning and spoke with McVay about his future. While nothing has been decided, McVay said Akers was still interested in being part of the Rams, and the sides would make a decision this week.

McVay says “there’s a possibility” Akers could play for the Rams on Sunday. It’s also possible the Rams could cut Akers.

“We’ll have clarity on getting him back and working with this group, or if that means exploring other avenues,” McVay said. “I want to … let him digest some of the things that we discussed, let him work through that with his family, and then we’ll see what the next step is.”

Akers and McVay haven’t said exactly why the running back left the team after mostly playing ineffectively behind a makeshift offensive line, but McVay has even bigger problems than calming relations with a struggling running back. The Rams’ entire offense is in one of its worst droughts of McVay’s career, ranking 30th in the NFL in total offense and 31st in rushing offense.

“The first option is let’s try to exhaust all measures as it relates to the Rams,” McVay said. “And if we’re all in kind of alignment with what we think is the best way to be able to move forward, you’d like to be able to do that. And if not, then we’ll make that decision.”

NOTES: C Brian Allen missed practice Wednesday after developing “a little bit of swelling” in his recently recovered knee, McVay said. Allen returned to the lineup last Sunday after getting hurt in Week 1. … WR Cooper Kupp is resting his ankle this week after injuring it last Sunday against San Francisco, but the All-Pro expects to play at Tampa Bay. … LB Terrell Lewis got a rest day from practice, and recently returned WR Van Jefferson was limited in practice.