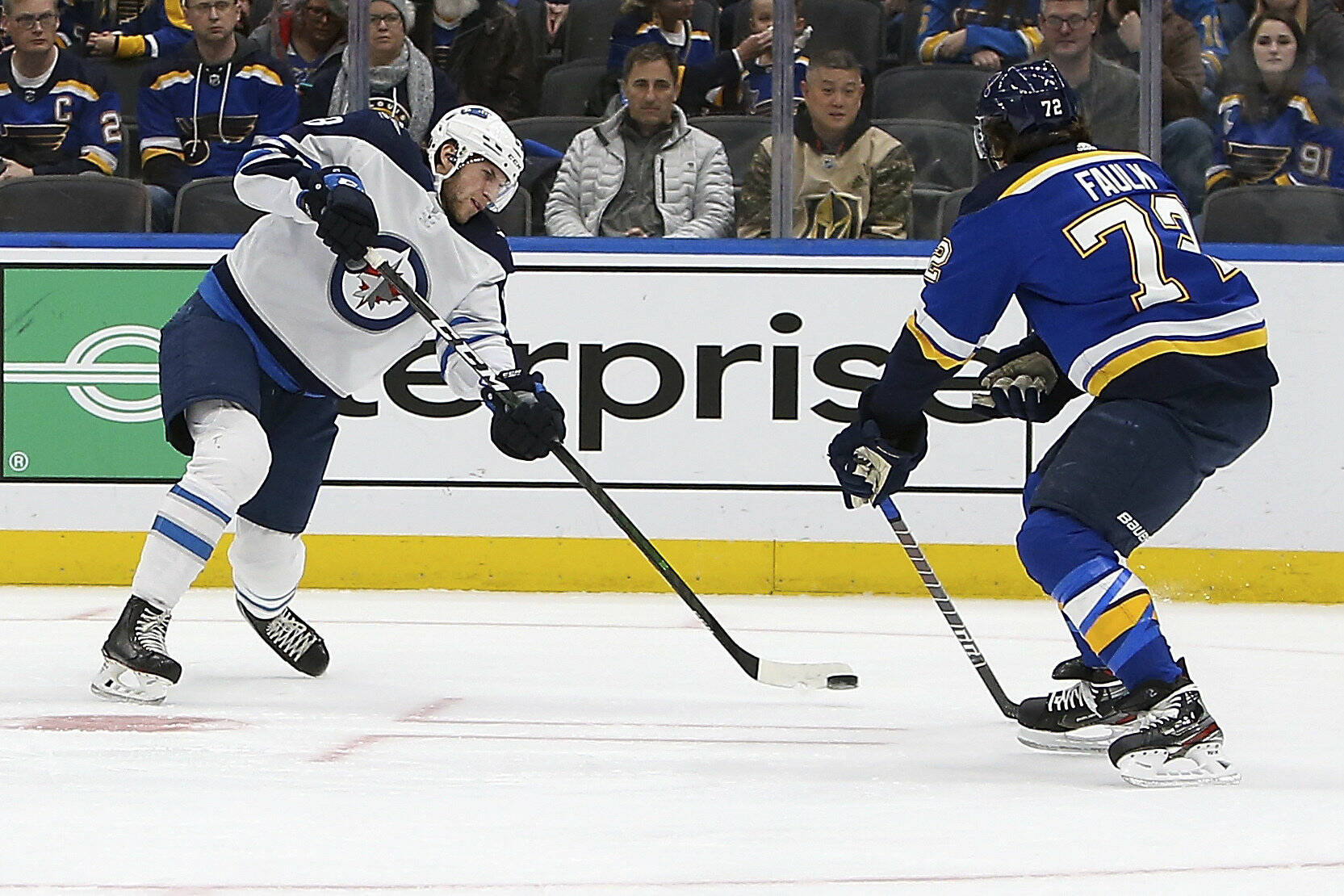 Jansen Harkins hoped his days of grinding it out in the minors were over. And it sure looked that way, with 132 NHL games on his resume over the past three seasons.

The 25-year-old was dealt a blow last month, however, when new Winnipeg Jets coach Rick Bowness delivered some bad news at the end of training camp. His name wasn’t included on the 23-man roster.

“I didn’t really see it coming,” Harkins said Wednesday. “We’ve always had really good depth at forward, ever since I came to Winnipeg. It wasn’t anything different. For me it was obviously a new coaching staff. They’re trying to see what guys can do for the first time. Obviously that’s not the way that I wanted things to go.”

Free-agent signing Saku Maenalanen and waiver pickup Axel Jonsson-Fjallby had essentially won jobs over Harkins and Dominic Toninato, who was also sent down to the Manitoba Moose.

To Harkins’ credit, he took the demotion in stride. He’s been on an absolute tear in the AHL, with a team-leading nine points (5G, 4A) through six games. No surprise, then, that with Nikolaj Ehlers and now Morgan Barron banged up, opportunity came knocking in the form of a well-deserved recall to the big club.

“Obviously you want to play with the top team and it’s disappointing. But that’s hockey. It’s a good example of how you can’t really take anything for granted,” Harkins said.

“I’ve always had a good time with the Moose. It’s great they’re in the same city and the transition isn’t too hard. Just try to take what I could from it. A good chance to play a bit more minutes and get a good start to the season and get my legs under me.”

Harkins could play his 133rd NHL game as early as Thursday when the club opens up a three-game homestand by hosting the Montreal Canadiens (7 p.m. CT, TSN2, TSN3). Either he, or Toninato (called up two weeks ago when Ehlers went down), will take the spot of Barron, who is dealing with an upper-body injury.

Defenceman Logan Stanley is also nursing a foot fracture and was placed on injured reserve Wednesday to clear a roster spot for Harkins.

“I got the call when I was driving to the rink (Wednesday). Practice, then go from there. Tomorrow’s a new day. Try to enjoy today, get a good sweat. That’s all I can do.”

Harkins was flying around the ice during Wednesday’s hour-long skate at Bell MTS Iceplex, and he certainly caught the eye of his coach.

Harkins, selected in the second-round (47th-overall) by Winnipeg in the 2015 draft, was placed on waivers prior to being assigned to the Moose. It created 24 hours of uncertainty, wondering if one of the other 31 teams might put in a claim, the way Montreal did just days earlier with defenceman Johnathan Kovacevic. Ultimately, everyone took a pass.

“I didn’t really think anything about going somewhere else,” said Harkins.

Harkins said pouting or sulking about the turn of events isn’t in his DNA. And the veteran of 156 AHL games (prior to this most recent assignment) said there’s no shame skating in the second-best league in the world.

“I’ve spent a lot of years with the Moose. I think I have a lot of respect for the AHL and the guys that come through there,” said Harkins.

“I worked my ass off to get a good chance down there. So going back down isn’t the end of the world. It’s good hockey. I just try to be the best player I can be down there, which I feel like with the roles I was given and the players I was playing with, it made my job a lot easier. Just try to get a bit of that confidence back, right? Showing up and demanding the best for yourself.”

Given how this year has started, the son of former NHLer Todd Harkins isn’t taking anything for granted.

“I’m not really a part of the plan of the coaches and everyone in the organization. I just come here and try to play hockey and compete. Whatever their plan is with me, that’s kind of up to them,” said Harkins.

“I think that’s kind of the clarity you get from moments like that, when things aren’t going the way you want them to. You’ve got to let go a little bit and just go out there and do what you can. For me, you can’t really control what they do with the lineup and what their plan is. All I have to do is come here, work hard and try to show what I can do.”