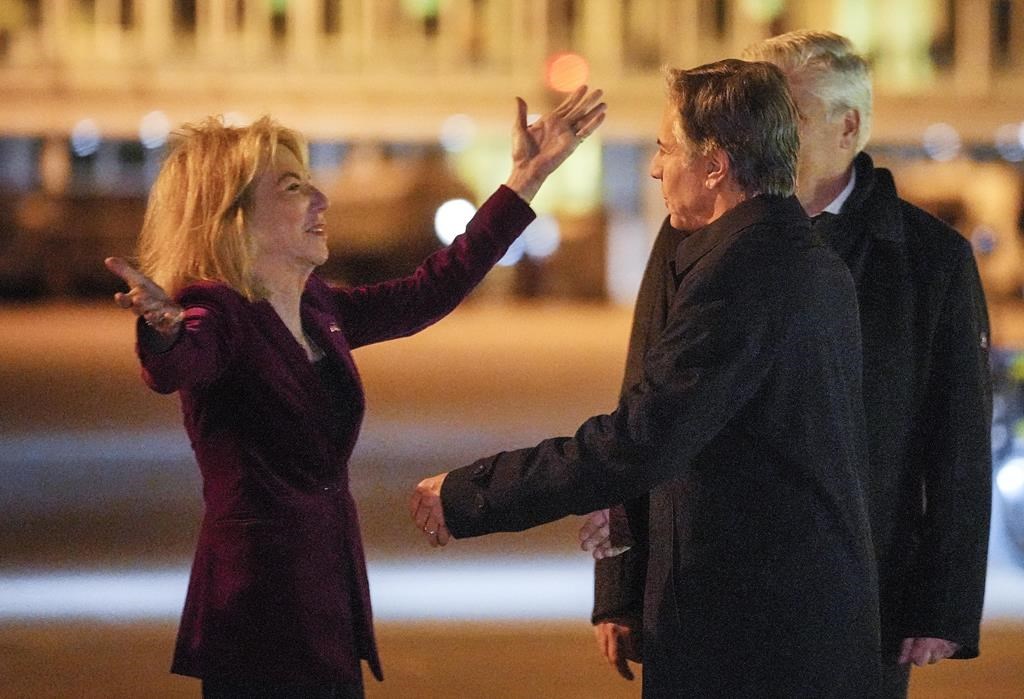 MUNSTER, Germany (AP) — Top diplomats from the world’s major industrialized democracies will grapple with the implications of Russia’s war in Ukraine, China’s growing economic clout and aims on Taiwan and Iran’s treatment of anti-government protesters when they open two days of talks in Germany this week.

Meeting in the western German city of Munster, foreign ministers from the Group of Seven nations — Britain, Canada, France, Germany, Italy, Japan and the United States — will take stock of the situation in Ukraine nearly a year after they first banded together to warn Russia of “massive consequences” if it went ahead with plans to invade the former Soviet republic that some believed were exaggerated at the time.

Since that warning was delivered — two months before the invasion was actually launched — the G-7 nations have largely followed through with their vow to punish Russia, although the sanctions have done little to deter Moscow, which has instead escalated its attacks targeting civilian infrastructure, sent more troops, claimed to have annexed areas of Ukraine and raised the possibility of using tactical nuclear weapons.

One looming crisis the ministers had expected to address at the meeting was averted Wednesday when Russia agreed to resume a wartime agreement that allowed Ukrainian grain and other commodities to reach world markets.

But, there remain other troubling aspects to the Ukraine situation, including energy supplies, Russian claims that Ukraine is preparing to use a so-called “dirty bomb” and suggestions it might respond with nukes.

Senior Biden U.S. officials traveling with Blinken said they expected the discussions on Thursday and Friday in Munster’s town hall — which local officials say was last used for an international diplomatic event in 1648 when the Treaty of Westphalia was signed ending the 30 Years War — to reaffirm G-7 “alignment and consistency” on Ukraine and a number of other issues.

Those include joint approaches to China, which has sided with Russia over Ukraine while also seeking to boost investments in critical and sensitive infrastructure in the West, and Iran, which in addition to conducting a brutal crackdown on protesters is accused of supplying Russia with armed drones and possibly other weapons for use in Ukraine.

In maintaining that unity, the G-7 has had to weather numerous major changes since the foreign ministers issued their stark pre-war ultimatum to the Kremlin last December in Liverpool, England: Britain is on its third prime minister, there’s a new right-wing government in Italy, relations between Germany and France have frayed and control of the U.S. Congress may be about to shift with potential implications for Ukraine policy.

The G-7 discussions will look at holding the bloc together in the face of the Ukraine conflict, which has exacerbated global shortages of food and energy as famine looms in parts of Africa and winter approaches in Europe. Europe is now considering moving forward with price caps on Russian energy imports aimed at further stifling Russia’s income in what some hope might help convince the Kremlin to stop the fighting and engage in diplomacy.

“There’s a lot of common positions and solidarity, I think, within Europe, within the United States, in terms of the need to support Ukraine’s heroic efforts to stand up to this invasion by Russia,” said Howard Solomon, a senior official in the State Department’s European affairs bureau.

On China, which has disappointed the West by siding with Russia over Ukraine, U.S. officials said the G-7 would be looking to further harmonize their policies related to Chinese investment in their countries as well to caution against antagonistic moves that Beijing might take against Taiwan.

German Chancellor Olaf Scholz will soon be visiting Beijing — the first European leader to make the trip since the Ukraine war began — as Chinese investment in a major port project in Germany has raised concerns in Washington and other capitals that China might gain a controlling interest in critical infrastructure in the heart of an allied country.

U.S. officials said they were pleased that the contract had been amended to reduce China’s stake in the Hamburg port to a minority position but said it was important that all nations look carefully at proposed Chinese investments and the potential security threats they might bring. Scholz has pledged to use his trip to make the case for Chinese moderation and assistance in calming the situations with Ukraine and Taiwan.

“There seems to be a growing unity in terms of positions and approaches” on China, Solomon said.