Consistency shows strides No. 10 UCLA has made on offense

Consistency shows strides No. 10 UCLA has made on offense 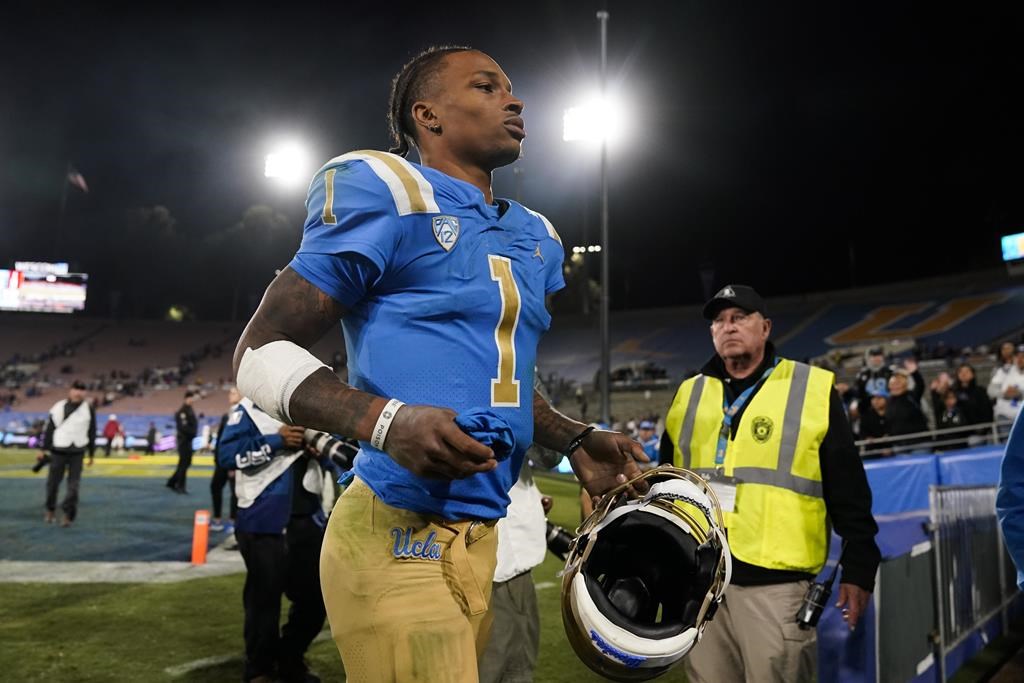 LOS ANGELES (AP) — It took years for UCLA to find consistency on offense.

Now that the No. 10 Bruins have it, scoring 30 or more points in each of their past 11 games, they have no intention of giving it away.

“Consistency is everything. It’s how you build success,” quarterback Dorian Thompson-Robinson said. “That’s the one thing I love about this team, we’re just continuing to build.”

There are plenty of reasons for the steady play of UCLA (7-1, 4-1 Pac-12; No. 12 CFP), from a fifth-year starter in Thompson-Robinson cutting turnovers to a dominant run game featuring tailback Zach Charbonnet behind an experienced offensive line.

Charbonnet says the main explanation is a willingness from this group of players to never settle on previous successes.

“I think coach (Chip) Kelly has done a great job of emphasizing getting better every week, and I think that’s something this team has really taken to heart,” Charbonnet said.

“We’ve done a good job of just finding any little detail, you know, we think we did wrong in the game, any little thing on film, and just correcting that. And I think that’s taken us to the next level.”

That attitude is reflected in UCLA’s performance on the field, perhaps best embodied by its quarterback. The start of Thompson-Robinson’s career was defined by attempts to do too much, leading to devastating mistakes.

During the 30-point scoring streak, he’s had six interceptions, with a single game throwing multiple picks. Thompson-Robinson has just three interceptions this season, one of which came while holding a 17-point lead with 31 seconds remaining in a win over Utah.

Improvement is evident in how the offense grades out internally, in addition to the scoreboard.

“It’s definitely the execution part. In the past, we’ve maybe been about 75% throughout the whole game. Now we’re hitting in the 80s and 90s, and everybody’s clicking on all cylinders,” Thompson-Robinson said.

Charbonnet is certainly playing his best ball, with eight 100-yard games and 15 touchdowns during the 11-game surge.

The senior has rushed for 198 yards in two of the past three games, gashing the Utes for nine yards per carry and Stanford for 9.4 yards per carry in a 38-13 win on Saturday.

In scoring three touchdowns against the Cardinal, he showed off his knack for shaking off contact.

Said wide receiver Kazmeir Allen: “You would think he’s a mean guy the way he runs. He’s just real cool, and on the field he’s a different person.”

But Charbonnet wasn’t perfect against Stanford. He fumbled on the opening drive of the third quarter. Fortunately, wide receiver Kam Brown fell on the loose ball.

Charbonnet was appreciative of Brown’s quick response, and he has spent the week focused on ball security as much as playing at Arizona State (3-5, 2-3) on Saturday night.

That is exactly what Kelly wants from his Bruins.

“I love our guys’ mindset, and I love their effort, and that was the big key coming out of that game.”

Credit: Consistency shows strides No. 10 UCLA has made on offense