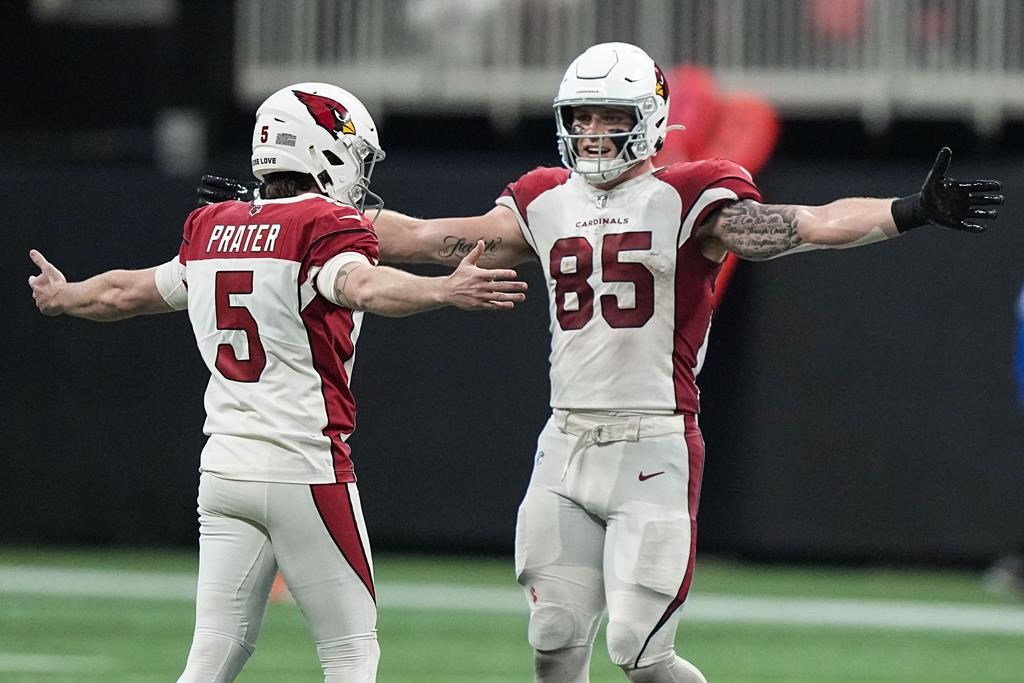 Certainly, Arizona would still like to win games and the 20-19 loss to Atlanta was disappointing. But at this point, the franchise is much more interested in building for the future since the Cardinals were eliminated from the playoff race a few weeks ago.

And there were some positive developments Sunday, despite the sixth straight loss.

David Blough — who was recently signed after Kyler Murray’s injury in December — played fairly well as the team’s fourth starting quarterback in four weeks. The former Purdue standout completed 24 of 40 passes for 222 yards, one touchdown and no interceptions. Now the 27-year-old is in the mix for a roster spot next season.

Rookie tight end Trey McBride led the team in receptions against the Falcons and second-year linebacker Zaven Collins hit 100 tackles for this season. Those two could be big pieces next season.

Coach Kliff Kingsbury said many of their performances were encouraging.

“No doubt,” Kingsbury said. “I think organizationally, (team owner) Michael (Bidwill) has talked to us about that. This is the time to find out who is really in and who we want to be here moving forward. That’s where we are at and, like I said, I’ve been really proud of the effort so far.”

The final unanswered question of the season is if Kingsbury will be back for his fifth season.

Blough certainly had a lot of good things to say about the coach after Sunday’s loss.

“He has been unbelievable for me,” Blough said. “The way he sees the game, the way he breaks it down. I know I am the fourth quarterback in four weeks, I get it, it’s not an ideal situation. It’s not ideal for anybody. He has done an unbelievable job not flinching and helping me get up to speed and just being able to go out and operate.”

Considering the non-ideal set of circumstances, Blough handled himself about as well as possible.

He showed poise in the pocket and didn’t make many big mistakes. He could get another chance in the team’s final game against the 49ers, depending on the health of Colt McCoy, who has a concussion.

Blough relished his first start since 2019 with the Lions.

“I started five games in Detroit and they didn’t end how I would have liked them to,” Blough said. “I knew then my best football was in front of me, and I hope as a player I have gotten better every year and learned from different people.”

The Cardinals (4-12) just don’t have a lot of firepower on offense. RB James Conner is battling a shin injury and three-time All-Pro WR DeAndre Hopkins didn’t play Sunday because of a knee injury. Scoring points against the 49ers in the final game could be tough.

McBride is making a late-season push during his rookie year, catching a team-high seven passes for 78 yards Sunday. He was the team’s second-round pick in April and looks like he’ll be a useful piece for the next several seasons.

“I knew with more reps, it would expedite his progress,” Kingsbury said. “He’s got a long way to go, but the skillset is there. I think he needs a full offseason and then things will really slow down for him. If you can get (Zach) Ertz and him on the field together next year in that 12 package, it can be a good weapon for us.”

LB Markus Golden had one tackle in 49 snaps against the Falcons. It continues an underwhelming season for the veteran, who had 11 sacks last season but only has 2 1/2 this year.

Conner hurt his shin during the Falcons game and Kingsbury said he’s day-to-day. … Hopkins didn’t play because of knee soreness. It was the same knee he had surgery on last season.

10 1/2 — That’s the number of sacks this season for the retiring J.J. Watt, who will almost certainly be a first-ballot Hall of Fame selection in five seasons. Watt announced last week that this would be his final season. Watt has topped 10 sacks in a season six times in his career and this is his first time hitting that mark since 2018.

The Cardinals play their final game on the road against the 49ers on Sunday. It will be the final game in Watt’s storied career and one more chance for the organization to get a look at young players before next season.