Bombers the class of the CFL

Bombers the class of the CFL 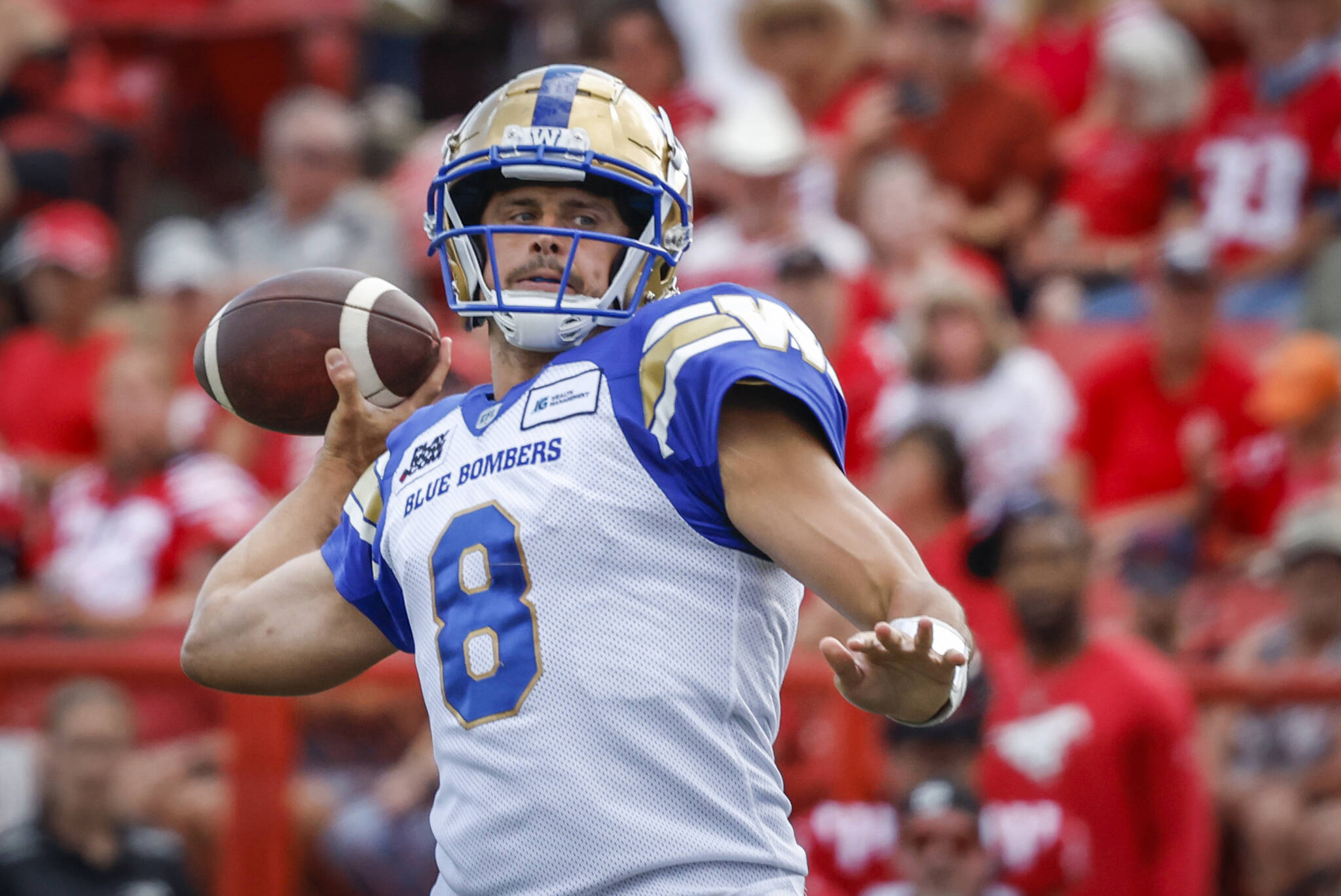 MONTREAL — It’s been almost two weeks since the last CFL Rundown column ran in these pages, the result of a long overdue vacation that I spent mostly in Ottawa for a Hamilton family reunion. While I was struggling to get a word in edge wise, the CFL was business as usual, including a Week 8 schedule that saw a bit of everything over the four-game slate.

The Hamilton Tiger-Cats edged the Montreal Alouettes at home, 24-17, to put the two clubs in a tie for second place in a weak East Division, at 2-5. The B.C. Lions (5-1) moved into sole possession of second spot in the West with a convincing 32-17 win at Mosaic Stadium over the Saskatchewan Roughriders, who dropped to 4-4.

The Winnipeg Blue Bombers remain the class of the CFL, improving to a perfect 8-0 with a 35-28 road victory against the Calgary Stampeders (4-2). To wrap up the weekend, the Ottawa Redblacks (1-6) earned their first win of the 2022 campaign, with a 23-13 triumph over the Toronto Argonauts at BMO Field.

After skipping a week, it’s left us with plenty to talk about. So, let’s get right into it with the latest edition of CFL Rundown.

1) The Alouettes outscored the Tiger-Cats 11-0 in the fourth quarter and nearly completed the comeback, which would have given Hamilton yet another late-game collapse in a season that’s already had too many. Montreal made it all the way to their opponent’s 21-yard line, only for QB Trevor Harris to get the hook by the league’s concussion spotter after he appeared to be in distress following a hit from Stavros Katsantonis on a run attempt that travelled 17 yards. No. 2 pivot Dominique Davis then entered the game and was promptly intercepted on what turned out to be the final play of the game.

2) Harris was predictably frustrated after the game, describing his removal from the game as “pretty messed up.” I get the issue he has, which was only made worse by the timing of his exit. While Harris professed that it wasn’t his head that was injured, I wonder had he not appeared to play up the damage by wincing on the turf — he managed to draw a crucial 15-yard unnecessary roughness penalty — if he would have been allowed to continue playing? Because based on the information the spotter had at their disposal, it was the right move to pull Harris.

3) There was another bit of controversy in this one, and it had to do with Khari Jones, who was fired by the Alouettes in early July. Jones was quickly scooped up by Hamilton — Montreal is now 1-2 under GM/head coach Danny Maciocia — and he was reported to have been presented a game ball in the locker room following the win. That prompted Alouettes owner Gary Stern to question whether Jones, who was hired by the Tiger-Cats as a consultant, was providing coaching to the players, which he isn’t allowed to do in his new role. If I were Mr. Stern, I’d be more concerned about facing Winnipeg over the next two weeks.

4) The Ticats were averaging just more than 18 points a game but managed to post three touchdowns, as well as a field goal against the Als. The improvement required a dual effort behind centre, with starting QB Dane Evans and backup Matthew Shiltz both getting significant playing time. It seemed to work, but I’m not sure how successful Hamilton will be employing that two-arm system. While Evans claims to be cool with it, I can’t imagine he envisioned this work arrangement after the Tiger-Cats chose him over Jeremiah Masoli.

5) The CFL can do some wacky things sometimes, but having Hamilton and Toronto play four times over the next five weeks is just ridiculous. It’s likely going to decide who finishes in top spot in the East, too.

6) The Roughriders are reeling right now, in the midst of a three-game losing streak. While they’ve fallen short on the field, they’ve also had to deal with a public relations nightmare off it, mostly to do with unsavoury conduct on the part of their players. At 4-4, it will be difficult catching up to the Lions and Stampeders, even if it isn’t impossible. What’s certainly looking possible is a fourth-place finish in the West, which would result in a crossover spot to the East. While I doubt the Roughriders would complain about how they got to a Grey Cup that they’re hosting, if they do become the first team ever to punch their ticket to the championship game while representing the opposing division, they’ll be forced to use the visitor’s dressing room throughout GC week.

7) Saskatchewan’s “tough” schedule to start the season has become a talking point in Riderville, and to the team’s credit they haven’t been using it as an excuse. And they shouldn’t be. While Saskatchewan has yet to get a bye week this season — they’re off this week, while the Bombers won’t get their first bye until Week 11 — they’ve had five games at home and six have been against the lowly East. What’s more, the back half of their schedule is even more challenging, with three games against the Bombers and two games against the Lions and Stampeders. Talk about a make-or-break back nine.

8) The biggest story in the Roughriders’ most recent loss to the Lions was how they led 17-4, only to be outscored 28-0 the rest of the way. And at home, no less. The Riders are banged up, their O-line needs to be much better and discipline remains an issue. Those aren’t easy fixes.

9) As for the Lions, what a turnaround it’s been for them. They’ve already matched their win count from last season, and Nathan Rourke was named a top performer for a third time this season, along with fellow pivots in Winnipeg’s Zach Collaros and Ottawa’s Caleb Evans.

10) Speaking of Collaros, while Rourke has arguably been the story of the season, I’d take the Bombers QB over him in a winner-takes-all showdown. Collaros is an absolute gamer, and only seems to get better when the cards are stacked against him. Oh, and since joining the Bombers in late 2019, Collaros is 25-1 in games where Winnipeg didn’t rest its starters.

11) The Bombers were high on rookie receiver Dalton Schoen early into training camp, and while they’ll never say that they’re surprised with how he’s doing in his first CFL season, it’s hard to believe that even his biggest supporters could have predicted his success so early. The 25-year-old caught two more touchdowns against the Stampeders, bringing his season total to six on the year, and has 32 catches for 583 receiving yards. That puts him third among receivers for total yards, behind Ottawa’s Jaelon Acklin (687) and Montreal’s Eugene Lewis (619), both of whom have played one fewer game, and just ahead of fellow Bomber Greg Ellingson (518).

12) The Bombers victory against the Stampeders last week was as big a statement game as we’ve seen from this club. Winnipeg was banged up, playing their fifth road game of the season and running on fumes. Calgary was healthy, playing at home and coming off the bye. Enough said.

13) I loved the comments from Stampeders QB Bo Levi Mitchell after the game. While he gave the Bombers credit, calling them the better team and adding that they’re so well coached they expose your weaknesses on tape, Mitchell also said he’s beaten Winnipeg “a thousand times” and that he looked forward to seeing them in the playoffs. That’s the confidence of a great leader.

14) While it was a big victory against a tough opponent, the win also clinched the season series for the Bombers over the Stamps, which is the main tiebreaker in the event they’re even in the standings.

15) It won’t mean much if it doesn’t spark a bit of a run, but I’m happy for Redblacks coach Paul LaPolice for getting his first win of the season. After watching that game, I’m still wondering if Ottawa is as bad as its record (1-6) suggests, or if the Argonauts are as good as their modest 3-3 mark.

16) Caleb Evans certainly made his best impression as a Redblack, following up a promising effort the week before in a narrow loss to Montreal. The 24-year-old completed 24 of 29 passes for 286 yards and two touchdowns, playing in relief of Masoli as he nurses an injured leg that will keep him out at least another two months. Ottawa traded for Nick Arbuckle from Edmonton as their Plan B, but Evans, in just his second season, might just be the best option to try and turn the year around.

18) Former CFL good guy Jeff Reinebold has found a new football home, joining the University of Hawaii as director of player development. I couldn’t imagine a better fit, as Reinebold spends his offseason on the Island and was once their D-line coach, for the 2006 and 2007 seasons under June Jones.

19) Former Bombers quarterback Chris Streveler has signed a contract with the New York Jets, damaging his odds of making a return to the CFL this year. But a lot can happen from now to the start of the NFL season in September, and if the 27-year-old does come back to Canada I’m fairly confident it will be with the Bombers for a chance of a three-peat.

After a slew of injuries playing hockey that included breaks to the wrist, arm, and collar bone; a tear of the medial collateral ligament in both knees; as well as a collapsed lung, Jeff figured it was a good idea to take his interest in sports off the ice and in to the classroom.

Credit: Bombers the class of the CFL